The method you use to test your model bridge will make or break it. Okay, most of the time the bridge breaks no matter what. How much weight your bridge holds before collapsing is partly determined by how you test the bridge. Whether you have a popsicle stick bridge, balsa bridge, toothpick bridge or other type of model bridge, these testing tips will give you a jump start and help you make an informed decision on how to test your bridge.

I’ve used and seen a lot of different ways to load model bridges. A lot of people do not want to buy lots of fancy equipment, so they use only what they have available to them. This makes for a lot of creative ideas for testing bridges. I’ll outline some of the ways I’ve seen that work the best. 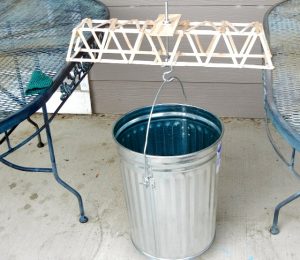 This is a classic method, and is used for Science Olympiad competitions. The bridge rest on two elevated supports, which could be two tables with a small space between them or one table with a hole cut in it. A loading block is placed either on top of the bridge or inside the bridge and a bucket is suspended below using a eye-bolt, S hook, and some chain. The bucket is then filled up with weight (typically sand, water, or free weights) until the bridge breaks or the maximum load is reached. 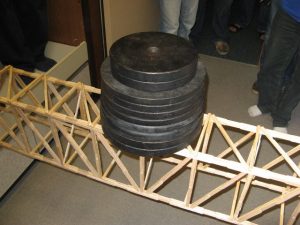 If you do not have access to a hanging bucket system or want to keep the bridge lower to the ground, you can simply load the bridge from the top. This does not work well for arched bridges, as they typically do not have a flat surface to put weights on. Many teachers host a classroom competition to see how many textbooks each bridge can hold. The textbooks are stacked on top of the bridge.

You can use books, free weights (from a weight set), or a bucket filled with weight to load your bridge from the top. Be careful when the bridge does break because if you have a tall pile of weights, whatever they are, they will come tumbling down with a lot of force. Sometimes I have placed cameras around the bridge filming the destruction, and the cameras have come close to being smashed by sliding weights.

Read more about the weights on top method

Standing on your bridge is perhaps the ultimate testing method. I love this because if the bridge holds, you were able to create a fully functioning bridge. This is why I am separating the standing method from the other “weight on top” methods. Standing on your bridge gives the best sense of fulfillment and moves your bridge from simply a “model bridge” to a real bridge, even if it is constructed from only balsa wood or popsicle sticks.

However, there are some situations where the human weight method is not appropriate. These cases are usually when you are given a maximum load the bridge should support, which is less than your weight. Also, standing on a bridge is a more dynamic loading than placing weights on top or loading a bucket with sand. It is a lot harder for you to stand still and load the bridge evenly, which causes the bridge to be stressed more in some parts than others. Standing on the bridge can also be dangerous, depending on how high off the ground your bridge is. The lower the better. 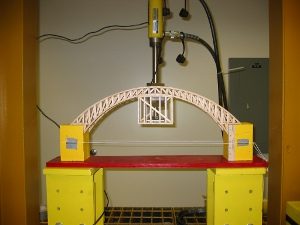 Machines usually make things easier. They can definitely help make testing a model bridge quicker and smoother, while providing an accurate measurement of the weight held. Machines are generally very consistent in how they load bridges, which allows you to not worry about loading error causing premature failure. Also, I think machines let you just sit back and enjoy the pride of your life being crushed, so why not make the most of it? Since you have your hands free, pull out a camera and snap some shots or record a video.

My time in the Science Olympiad taught me to be very efficient during the testing process. The longer a model bridge has to hold weight, the greater chance that it will fail early. We were given 10 minutes to set up and test our bridge. I spent most of the time setting up the loading block and as little time as possible actually pouring sand. As soon as I starting pouring sand, I didn’t stop or delay at all.

While most handheld cameras do not capture frames quickly enough to really see what is going on, you can still get a good idea of how your bridge failed from watching a video. I recommend always taking a video of the testing. The more angles you can get, the better. I now try to set up three cameras: one broadside view, one looking into the bridge, and one from a higher angle.

What is the Best Way to Test a Bridge?

I’ve shown a lot of different methods, and you want to know which one is the best to use for your bridge. The answer is: it depends. As I mentioned earlier, a machine is probably the most steady and consistent method, but they sure are expensive. I grew up using the hanging bucket method in Science Olympiad, and I can use that method very well and get very consistent results. However, because that takes a while to set up, I am moving to using free weights placed on top of the bridge. This is the method that works the best for me with the equipment that I currently have. You will have to figure out how much time/money you want to invest into testing your bridge and choose a method.

13 thoughts on “How to Test Your Model Bridge”

Articles in Break It