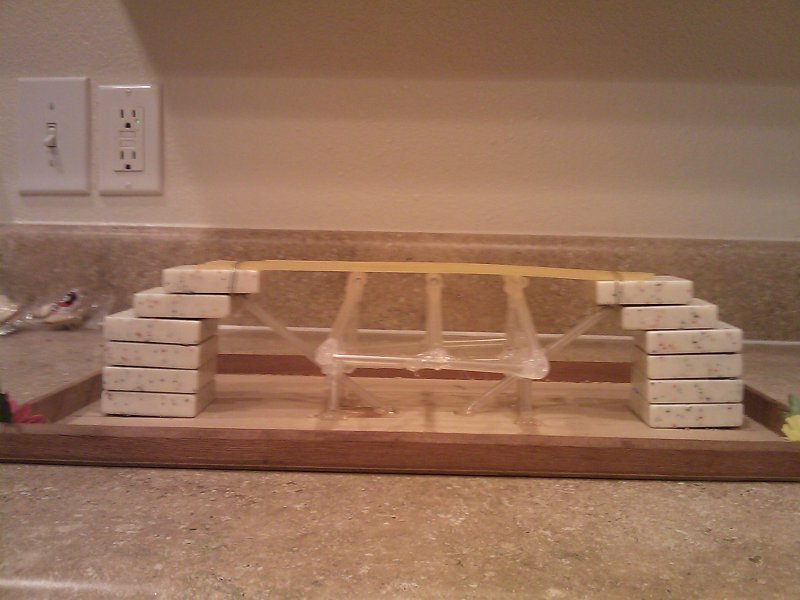 I just wanted to say thank you to everyone who has contributed to this site. After two failed attempts to create a bridge we knew we needed help so we found Garrett’s site. With a lot of reading =P and a little luck we were able to create a straw bridge of our own. It’s not as neat as some of the ones on the site and we used hot glue, from what I have seen here that might be cheating a little. However, we found that it holds 5 lbs so far and potentially more, considering our first bridge broke with a large ball of string as the weight and our second broke with a coke can. I think our success rate was pretty high.

Thanks again!! The best site I have found by far for breaking down the basics of bridge building. My daughter Megan is in 5th grade and she has one of the best bridges out of her entire class thanks to this site. AND for a mom who didn’t do well in physical science I was able to help my daughter create a very sturdy project.

*Note from Garrett*
Using hot glue isn’t cheating at all, it is actually a fairly common choice for glue. It isn’t my first choice because it isn’t as strong as some other glues, but it is also pretty easy to use. And that is what matters more in some cases.

1 thought on “Spaghetti and Straw Bridge”