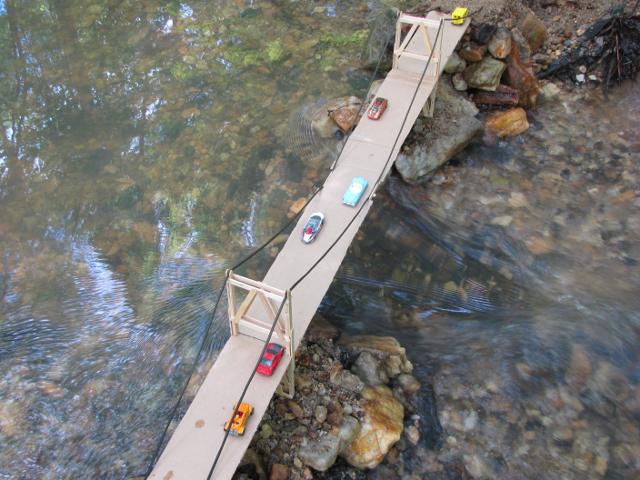 Here is the video of the bridge being tested to failure. I have two different angles showed right after each other. I think this video is very enlightening as to how a suspension bridge reacts to a load.

It appears that the bridge failed due to uneven loading. The weights leaned to one side, and I over-corrected as I kept adding weights.

This suspension bridge was very flexible, as you can tell from the video. I read an article about building model suspension bridges that said it was difficult to get them flexible enough. Also, I did not have any hangers (vertical cables hanging off the main cables) on this bridge. I did not make any mostly because of the great difficulty in making them even and I did not know a good way to attach the hangers to the main cables. In real life, the cables are metal and have metal clamps and other devices that make this process easier. But I was using parachute cord.

Plans for this Suspension Bridge

Do you want to build a model of a suspension bridge? They sure are fun and are great to look at when you are finished. My models are always functional, which means you can test them as well. While I do not have blueprints for this particular suspension bridge, I do have plans for a smaller one. You can check them out here:
Suspension Bridge Blueprints