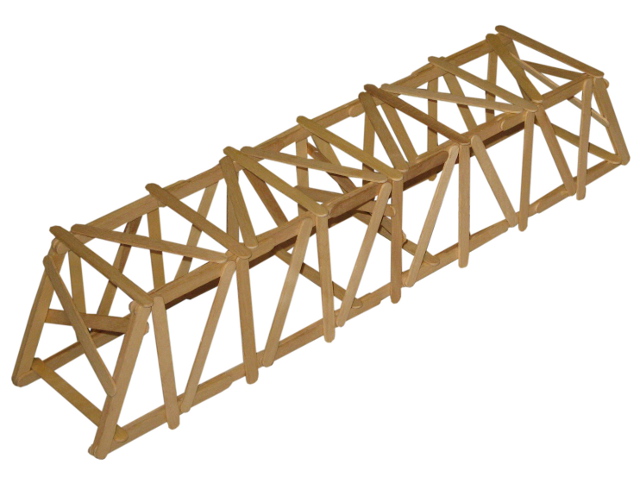 The 100 stick popsicle bridge challenge is on. This Howe Truss bridge uses 99 popsicle sticks, spans 21 inches, and holds 200+ pounds. It’s efficiency score is 678. This is an updated version of my old “Popsicle Bridge #3” which was the same length, but slightly different in construction.

This bridge was built from completely un-modified popsicle sticks, Level 1 sorted. I used only Elmer’s White glue to join the sticks together. To test the bridge’s strength I raised the ends up off the ground with wooden blocks, and placed free weights from a weight set on top of the bridge. I did my best to keep the weights centered over the bridge and to place them down gently, and I do not think the bridge broke because of the method of testing.

These three photos show the progression of the bridge breaking. Watch the left side as it starts to fail.

Slow Motion of the Bridge Breaking 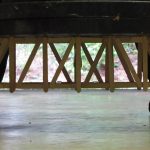 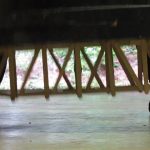 My conclusion based on these photos is that the lateral bracing on the left side popped off from the side of the bridge closest to you in the photo. This caused those angled popsicle sticks to twist, and the bottom chord starts to twist a little as well. I think it was a glue joint that came loose and started the chain reaction. The angled sticks on the ends may not have been perfectly even and square with each other, which would have caused a weaker joint.

The other possibility is a weak popsicle stick, which started to fail and then brought the rest of the bridge down with it. I only used a level 1 sort for these popsicle sticks, so this is possible. 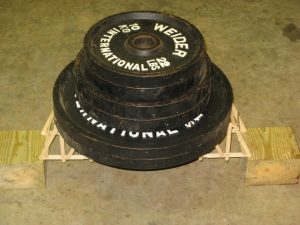 Here we have a shot of the bridge holding some weights. Also you will see the analysis of this Howe Truss Bridge as shown by the free Bridge Designer program. This picture shows how the forces were spread out on the bridge at the time it failed. Notice how the forces are concentrated much higher in the middle of the top and bottom chords, as well as on the end angled members. This supports my thought that the left side angled members would have failed first. They were under a very significant load.

So now you have seen the video, and the photo evidence. How do you think the bridge broke first? What would you do to make this bridge better? Keep in mind that I was building under a 100 stick limit constraint.